Anubis J. died on Monday, early in the morning, just as the sun was coming up.  It had been a hard night -- a dog with nary a complaint for his almost fourteen years barking for minutes on end with the sudden pain from the tumors that had attached to his vitals and drained him of blood.  The drugs were better than nothing at all, but they didn't help nearly enough, and despite my dislike of euthanasia from previous experience, our choices were rapidly narrowing to bad ones -- the emergency vet now or the vet he knew really soon. Six hours of that kind of pain was quite enough -- really too much. 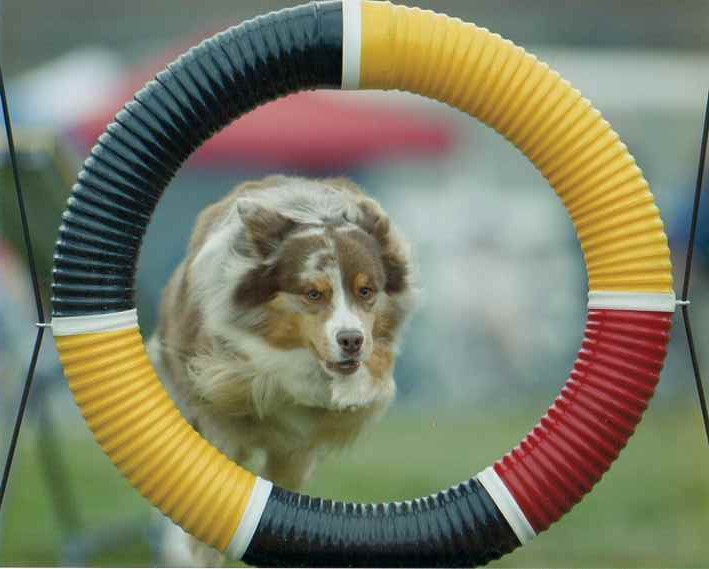 Then he died -- arched his back, looked me in the eye with what looked almost like ecstasy, or relief, and fell back, still looking, but clearly dead.  I love that dog dearly, and he's gone.

I'd always figured Anubis J. for a Summerland rest, and hopefully a return to us -- as the song went:

But it wasn't to be.  Once the vigil and the cremation and the incredible emptiness that a dog and familiar leaves behind had set in, I looked for him in meditation, and he was gone.  Instead I found a metaphorical message  -- not the "gone fishing" that I had expected and hoped for, but rather "Graduation Day".  I was led to understand, in the not-quite-clear way that meditations in a pathwork have -- a few things I hadn't considered before.  Going back to some basics --

It's not clear at all to me what Dogs Are.  I quite realize this is a question that everyone is supposed to know the answer to -- dogs are "just animals" and "human's best friend".  Those of us that are of the view that identity survives the dissolution of the brain tend to think of dogs as bound to us as individuals, possibly waiting in a a canine Heaven or Summerland -- as my vet says on the wall poster, "Heaven is the place where all the dogs you've loved come to greet you".  I expect something like that is probably true in many cases, and in Anubis J's case, I'd looked forward to the possibility.  Yet there he was, gone, graduated.  From what?  To what?

Well, dogs are complicated.  Dogs, like horses, but perhaps unlike cattle and only a little like cats, are co-evolved species.  There would be no dogs if there were not humans -- we came up the spiral together, and to some degree we have created and molded each other.  Dogs molded humans by enabling our survival in early times,and by shaping our emotional constellation.  There might be no humans -- as we understand ourselves today -- without dogs, emotionally and perhaps physically.  We created and molded dogs through breeding,  love,  cruelty, through all the myriad interactions two species so closely bound will have in the tens of thousands of years we've been together.

So a dog isn't just an animal in the sense of any other mammal on the planet; she's a part of the human web of consciousness, and we are part of the canine web.  I could, but won't, digress for a very long time into the dimensions of emotional, physical and mental experience that they open up in us, and we in them.  The point is, they share to some degree in our consciousness -- our language (Jackson had about 50 clearly understood words), our living arrangements, our value systems, our habits.  Yet they aren't little furry humans -- they're clearly neotenous wolves.

In the waking world, dogs often make their way as "service animals" -- would that we could say the same about ourselves!  They are natural Virgos.  Many dogs take on  tasks for humans involving guidance, warning, protection, and pursue those tasks with a devotion and intensity that we only reach in peak experience.  Jackson was an agility dog, handicapped only by his mediocre handler -- take a look at the fierce concentration in some of the photos.  It's common for service dogs to be raised by one family, then graduate to the family or individual that humans have selected for them to serve.  They love, they learn, they say goodbye and they are gone to their new work, usually until death.  Something of the sort seems to have happened to Jackson this week.

I have to say, and part of this can be safely put to human bragging, part to plain truth, that Jackson was a shockingly exemplary dog.  His extreme physical beauty was almost an afterthought; he was deep, intelligent, thoughtful, brave and wise.  When I went to look for him and hope for another life together, what I found was a sense that his latest life was the last in this form.  He was done, completed at this stage, passed the scrutiny of the Big Anubis and his Feather, gone not so much to his reward as to his work.  He was done with "dog as we know it", but not necessarily done with Dog.  There's something more for them beyond their existence here with us.

I can't really imagine what he's doing.  It's a big universe and there are lots of them.  I doubt seriously that he's working as a human -- our species are so different -- it seems more like he's working as "whatever comes after Dog if things go well".  For him, despite my mistakes, things seem to have gone well.  His graduation seems to involve service, and all the qualities we value in canines.  It may not be bound to this planet or this time -- no reason to expect the constraints of life to apply beyond death.  His work is in accord with what Saint Doris Lessing called "the Necessity".

It raises questions for us.  We love peace, pleasure and each other (at least in our better moments) and I've had some happy thoughts about my next round in the Summerland -- I've heard some rumors about inns where the music is continuous, fabulous and very improvisatory.  But if something comes after Dog, it may be that something comes after Human.  Our Gods, who are to us as we are to our Dogs, may have work in mind for us that we can barely imagine.  As our Buddhist cousins say, much of it may involve return and assistance here on Earth; some of it may not.

Watching Jackson's death was a lot like watching a difficult birth -- agonizing, excruciating pain, deep focus, an inevitable result, then -- a measure of release and ecstasy.  Dying was damned hard work for him, and I expect for us.  At the end there's likely to be peace, and reunion.  But there also may be a measure of new challenges and assignments.  I wonder how he's doing and what ours might be.

I miss him very much.